This is turning into an annual event, as the time of year rolls round when I teach module EURO30605 Memory & Identities in European Culture, thinking about the way that the Spanish Civil War and its International Brigade volunteers are remembered.  2021 will be a very different year.  Under Covid restrictions, we can’t make the annual pilgrimage to the Nottinghamshire County Hall memorial to the International Brigades – what I usually refer to as “the most glamorous field trip you will make at Uni” – but what it misses in glamour, it makes up for in meaning.  I will miss it, as it is genuinely one of the highlights of my academic year.  There have also been some changes at NTU- the module leader who did so much to develop EURO306, my colleague Dr Jo McCormack, has moved on, and is much missed.  The module is now being led and revised by my equally valued colleague Dr Gianluca Fantoni, an expert in the history of anti-fascism in Italy.  So, this is both sad, and exciting.  It may also be the last year that the module will run – the last NTU European Studies students graduate this summer, and there have been big changes also to the way that Languages is taught in the department, which mean that change is in the air.  But history and memory continue to be a focus, and the study of the history of both fascism and anti-fascism will go on – we hope.

Out in the wider world, political upheaval (not least in America) confirms that this subject has never been more relevant.  Right wing populism and ultranationalism continues its progress across Europe (if rather dented by its lack of effective response to the pandemic and the defeat of Trump), seen not least in the rise of Vox, the Spanish far-right party which surged to 15% of the vote in the November 2019 General Election.  In that context, interest in the fictional rewriting of myths of national greatness, with particular reference to Franco’s terrifying effectiveness at it, is of more interest than ever, as this JSTOR blog post by Matthew Wills demonstrates:  How the Fascists Rewrote Spanish National History.

Meanwhile, Spain’s political “memory wars” continue.  In September 2020, the Spanish government under Prime Minister Pedro Sánchez’s approved a “Law of Democratic Memory,” under which the victims of Franco’s regime can finally seek justice.  Included in the new law is a re-assessment of Franco’s monumental tribute to the triumph of fascism in Spain, and until 2019 his mausoleum, the Valle de los Caídos, which will undergo a process of “resignification”.  In December 2020, the Spanish state also finally seized control of the Pazo de Meirás in North West Galicia which Franco and his descendants had used as a summer retreat.  The furious response of much of Spain’s right wing to these moves demonstrates that the battle to control that same national narrative continues, and that the struggle between memory and active strategic amnesia, between the desire for justice and reconciliation in order to move on, and the desire to bury, remains unresolved, as  Liam Jackson Abellán reflects in this beautifully written post on Open Democracy: At the open grave: dealing with the legacy of Franco’s terror in today’s Spain.

This legacy of unfinished business in Spain is also evident in the struggles in 2020 over both the tomb in Geneva of Julio Álvarez del Vayo, foreign minister for the Republic during the Civil War, and the memorial plaque in Madrid to Francisco Largo Caballero, Republican prime minister during the civil war, who was later arrested by the Gestapo and deported to a concentration camp.  The latter was removed by the right wing city government of Madrid (supported by the Vox), which has branded Caballero a “terrorist”, as documented here in The Nation: How the Fight Over Spain’s Anti-Fascist Legacy Involves a Former ‘Nation’ Editor.

Historically, the International Brigades themselves have seen a renewal of interest, driven in large part by the publication in October 2020 of Giles Tremlett’s new book for Bloomsbury The International Brigades: Fascism, Freedom and the Spanish Civil War (review by Paul Mason for The Observer in the link), which I will admit is still on my birthday list, but will go on the reading list for this year already, for those students whose passion has been ignited by the subject.  In the mean time, there is a great podcast with Tremlett from Travels Through Time, which is well worth a listen. In addition, there is the fantastic research work being done on transnational resistance to fascism by Professor Robert Gildea and a research network brought together under the Social History Society at University of Oxford, uncovering the buried stories of courage among ordinary people – many communists or Jews – considered at the time by some to be “the scum of the earth”, summarized in this piece for the Conversation:  The forgotten war heroes who left their own countries to help others – and were never thanked.  (The book, Fighters across Frontiers: Transnational Resistance in Europe, 1936-1948 was published by Manchester University Press in 2020).  This focus on the lack of respect for anti-fascist volunteers of the early 20th century is certainly echoed by information given to me by a relative of an International Brigades volunteer who asked to be anonymised:

“The state considered them a continued threat when they returned. Canada has been releasing official secret memo[s] under 50 year rulings about the extent [to which] the communist volunteers were monitored by the secret service as they feared them as insurgents for a ‘red wave’ of civil uprisings in Canada and UK. So … to some extent [this] was not about failure to acknowledge the Brigades’ efforts, but … the very fact the state recognised how powerful the movement was and considered the Brigade a threat, and so did little to acknowledge the Brigade publicly for fear of promoting it, until the fall of the Berlin wall and first Spanish democratic elections in 1979/80.”

For anyone interested in finding out more the Canadian volunteers in the International Brigades specifically, there is a great research resource available which documents their histories, here: Canada & The Spanish Civil War.

It’s a great shame, then, that we won’t be getting our visit to our very own contested memorial to the Nottinghamshire Brigaders (see previous posts) this year, to pass on the “post-memory” of the conflict to the next generation.  But I have my memories of the last trip, on 27 February 2020 – just before Covid hit us.  This time a winter sun shone, the rain stayed away, and Jim Jump, Chair of the International Brigades Memorial Trust, brought his banner (pictured). 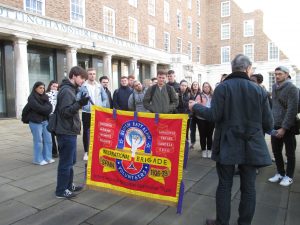 Unfurling this led a Notts County Council security guard to approach and ask us if we were protesting anything, and it seemed a bit late to say we were protesting the Falangist military coup in Spain in 1936.  For a brief tense moment, I wondered if getting the final year students detained in the County Hall cells (if there are any) had been covered by my risk assessment for the trip.  However, our friendly security guard just told us very politely that it was our democratic right to protest anyway, which was actually both quite funny and very refreshing.  Rumours of the death of democracy have been exaggerated, it seems (hopefully).

Here are our students beside the memorial, with Jim at the back, still free citizens – thanks to resistance fighters everywhere (and the robust democratic values of Notts County Council security). 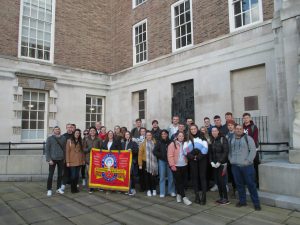 Our 2020 visit made it into the IBMT’s newsletter, ¡NO PASARÁN!, and the feedback from students was, as always, enthusiastic, including the following comments:

Jim’s family background I found very interesting, hearing about his father’s life fighting for the Republicans in Spain.  First time I have heart about British people fighting in the Civil War.

I found the ground up approach to history with an emphasis on personal stories particularly interesting.

I was surprised by the fact that Germans fought in Spain.  It was amazing to witness Jim’s passion about this subject.  It’s good knowing that people are actively passing on history and memory to younger generations.

It was really interesting to hear a first-hand account of the conflict and history from a person so closely related and affected by it … The motivations for the British Brigade and its importance was something I didn’t know and was very informational.

Listening to someone so close to the conflict makes it easier to understand the reasoning behind why people came from other countries to fight in Spain.

It’s sad that they were never thanked properly.

I came to understand the fact that atrocities were committed by both sides and that a historical understanding should not be binary.

Superb insight into a subject I knew nothing about! Could listen to Jim all day.

So thank you Jim, I echo the sentiment entirely, and we look forward to hearing you talk, virtually this year, in March.  The memorial to the survivors and the dead of the International Brigades of Nottinghamshire will endure, and we will be back to honour their memory and share their stories again on the other side of this crisis.