It’s a very long time since I’ve posted here, but in advance of another visit to the International Brigades memorial at Nottinghamshire County Hall, I thought I’d add a few more thoughts and clarifications.

When I made the original post, I claimed that when the memorial was first installed in 1993, it ‘did not immediately appear contentious.’  In fact, this is just plain wrong on my part.  Jim Jump, Chair of the International Brigades Memorial Trust, who came to talk to the European Studies and History students of Nottingham Trent University last year (and is returning in a few weeks), sent me this extract from ‘Memorials of the Spanish Civil War’ by Colin Williams, Bill Alexander and John Gorman (Alan Sutton Publishing, Stroud, 1996) which shows that it was always the subject of a ‘heated controversy.’  Which is interesting in itself – no time is without its political struggles. 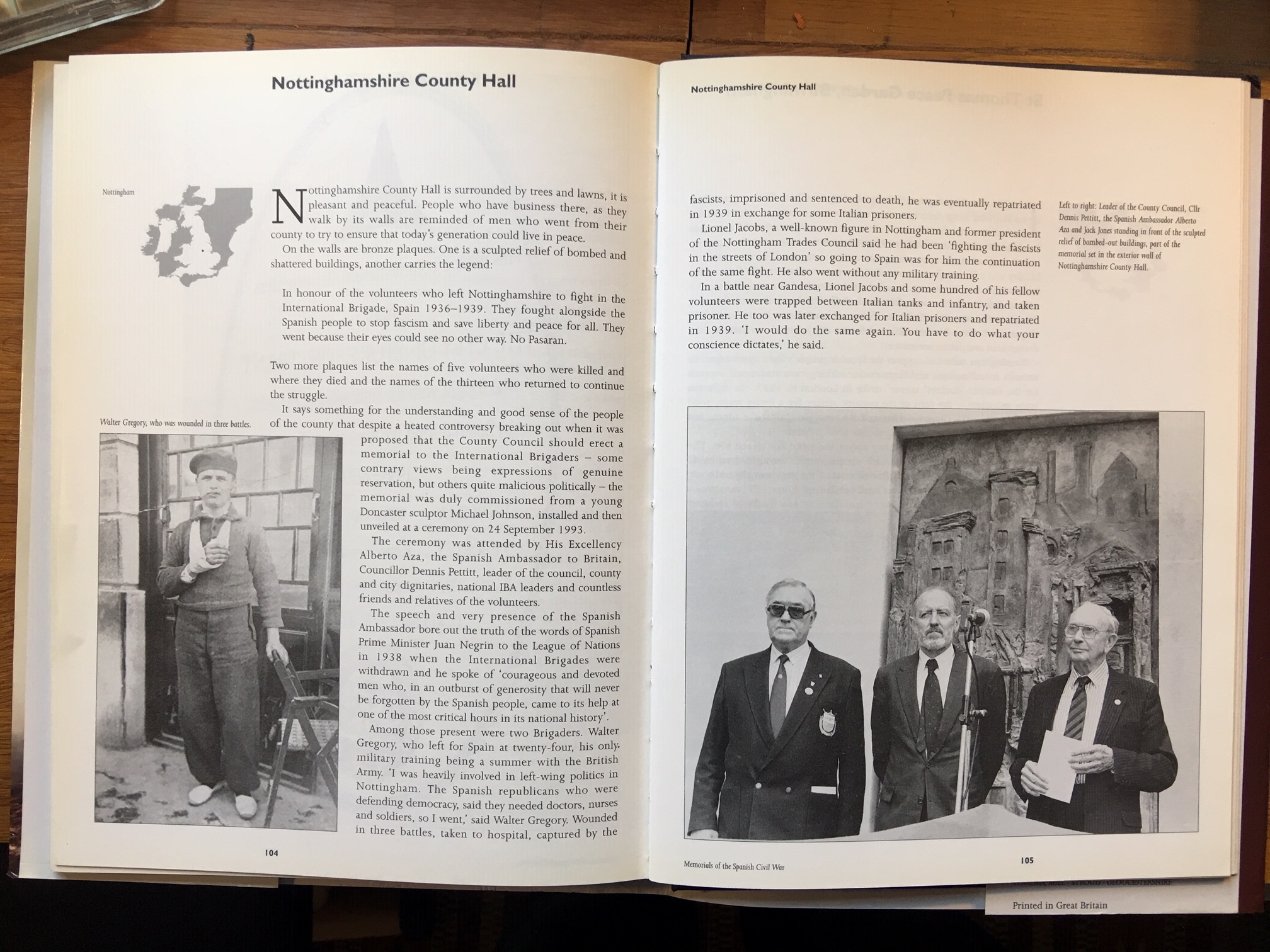 I’m grateful to Jim for sharing this, not least because it includes an image of the unveiling of the memorial, but also another picture of Walter Gregory, International Brigades veteran, survivor of three battle injuries, and author of The Shallow Grave (see previous post).  That’s him on the left, recovering from one of his injuries.  He was there to see the memorial unveiled, with his name engraved on it, as well as the dear friend he lost, Bernard Whinfield, killed at Teruel in January 1937.

Also mentioned on the memorial is  Frank H Ellis, another veteran of the International Brigades, who was present at the unveiling.  The pictures below show a portrait of Frank when young and serving in World War 2, as most IB veterans went on to do, seeing it as a continuation of the fight against fascism they had committed to in Spain.  Below that is a scan of Frank’s International Brigades card, complete with stains from an unknown source. 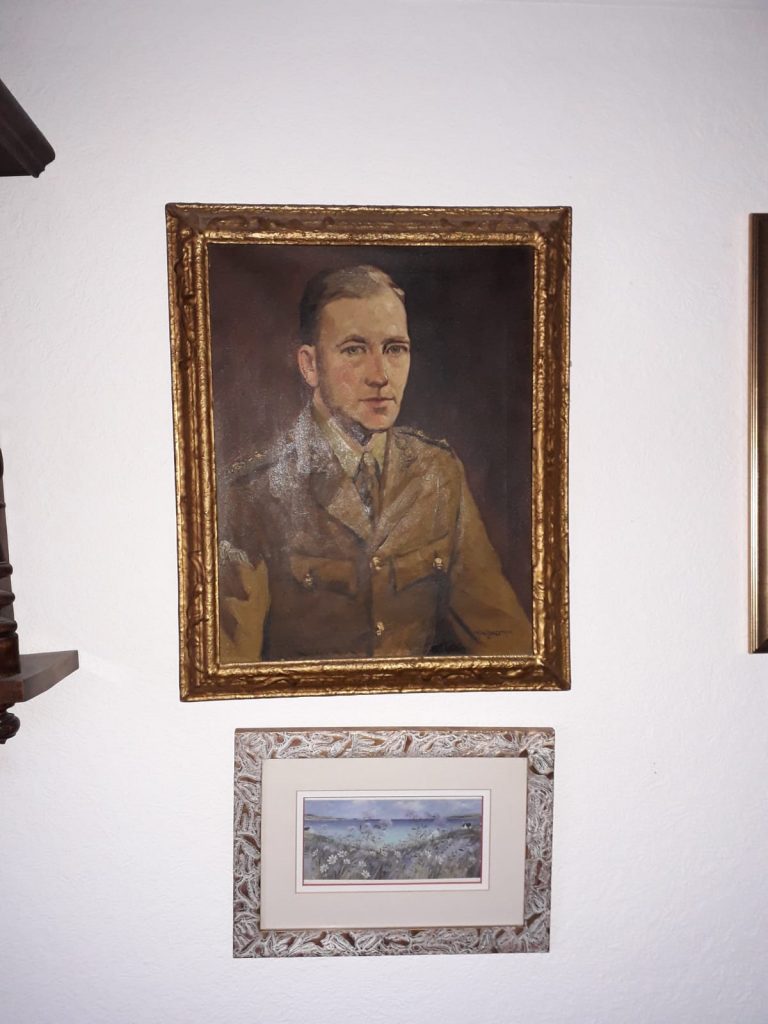 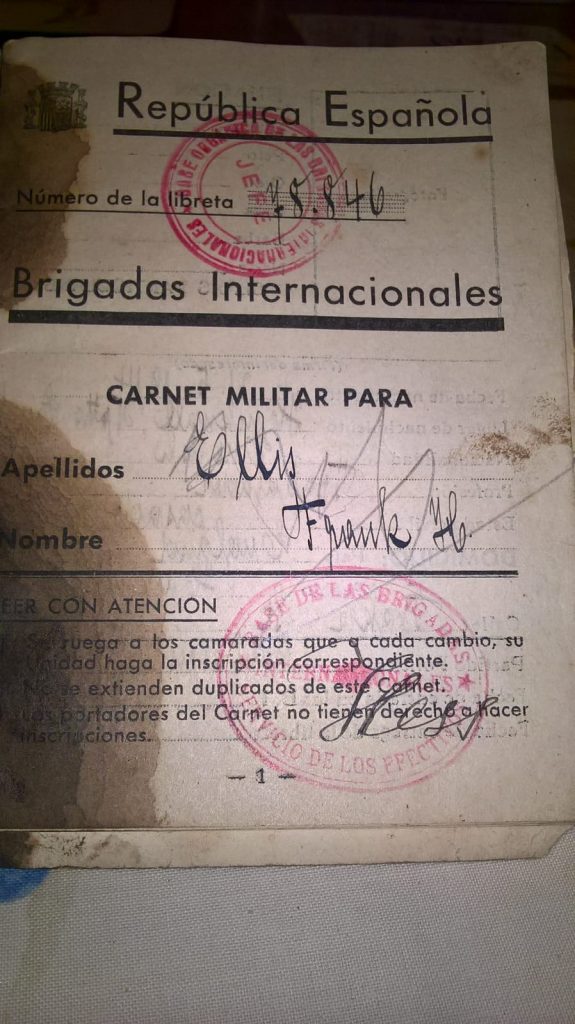 Although Frank sadly died some time ago, I was privileged to meet Frank’s daughter, Karen Weatherall, and granddaughter, Kirsty, who came to speak to the NTU History and European Studies students last January about Frank’s experience, and supplied the pictures.  According to Karen and Kirsty, Frank rarely spoke about his experiences – something common to many veterans.  However, Karen spoke powerfully to the students about working class life in the 1930s, and the motivations for the left wing politics and commitment to international working class solidarity which led them to risk their lives.  She urged students to think about the almost unimaginably tough conditions of poverty and recession which gave meaning to the actions of the volunteers, in an age when politics was far more than a form of consumer choice – both intensely material and ideological, a matter of survival, and the hope of a better life.

I’m so grateful to Karen and Kirsty for participating on a cold and wet visit at the end of February 2019, and giving us a direct connection to a War which is both historical, and very present.  They are to the back right of this photo, which shows Jim Jump in the left centre, with Councillor Alan Rhodes of Nottinghamshire County Council, in front of the memorial. 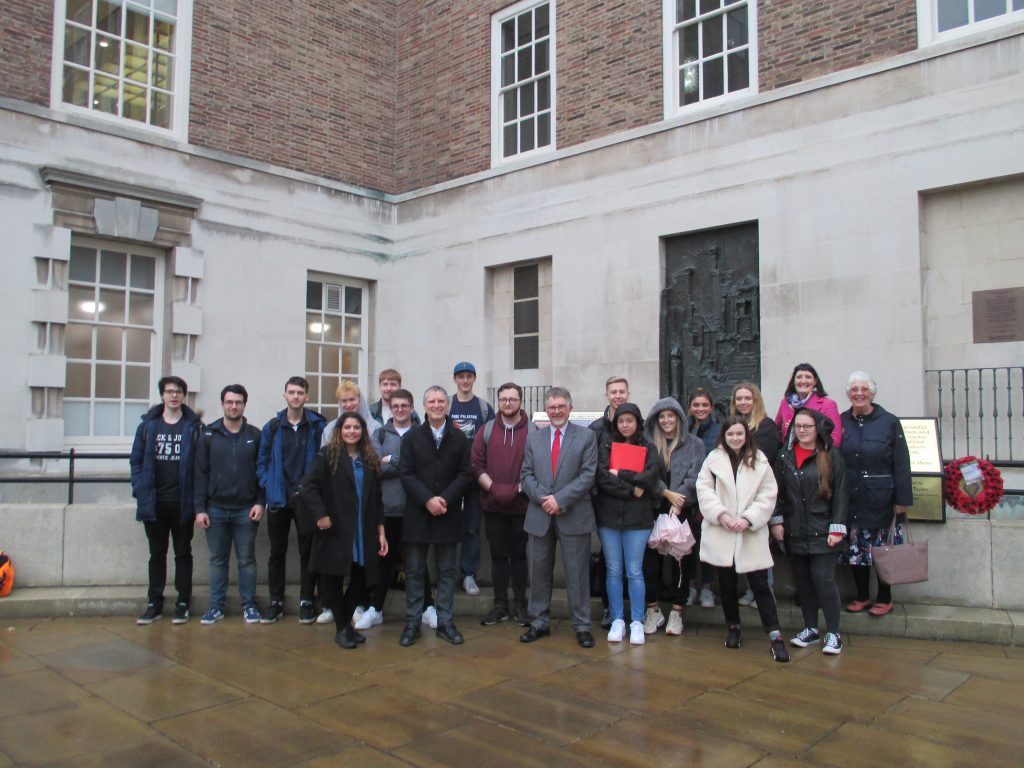 Ria Kakkad, one of the students, shared her thoughts afterwards, and said: ‘Although I have been studying the Spanish Civil War for the past 4 years, I knew little about the International Brigade and how many people risked their lives for democracy. It opened my eyes as to how close to home the connections are to people who fought in the war. It is great that Nottingham County Hall continue to remember this part of history by placing a memorial and I hope they continue to do so in the future.’

I’ll leave the last words to Karen, who asked the students, next time they are in the sunshine in Spain, just to think about the volunteers and what they were prepared to do for freedom.