In the previous post, I highlighted the importance of memorial plaques – often taken for granted and passed by – in reclaiming suppressed histories and reasserting identity.  As an afterthought, I want to highlight one small way in which these struggles are still being reflected closer to home, in Nottingham – showing that the contentious nature of historical memories of the Spanish Civil War can still cause ripples in the political world.

The International Brigades of the Spanish Civil War of 1936-1939 were those from around the world who, in the face of official “neutrality” from their national governments (or active hostility – many were German exiles), volunteered to fight against Franco’s fascists, and on the side of the elected Republican government.  Almost all of them were ordinary working people, sometimes connected to the Communist Party, or with other connections to the Left, such as the Co-operative Movement. Their bravery and commitment to anti-fascist solidarity still resonates through our culture, from George Orwell’s Homage to Catalonia, his memoir of his time with the Trotskyist group the POUM, to Ken Loach’s 1995 film Land and Freedom, to Manic Street Preachers’ 1998 number one track If You Tolerate This, Then Your Children Will Be Next, inspired by the Welsh miners who signed up to fight (as the lyrics say, “If I can shoot rabbits, I can shoot fascists.”  See Francis, 2012).     However, with the death in 2016 of Stan Hilton, the last surviving British veteran of the International Brigades (in Australia, aged 98), the cultural memories, and physical memorials, of their service, become increasingly important – part of what Marianne Hirsch calls “post-memory” – ‘the relationship that the “generation after” bears to the personal, collective, and cultural trauma of those who came before’ (Hirsch, 2008), the effects of which are still being experienced in the present.

To the left of the main entrance to County Hall in Nottingham, and well worth a visit, is a memorial to the people of Nottinghamshire who volunteered to fight with the Brigades.  ‘They went because their eyes could see no other way,’, it states.  ‘NO PASARAN.’  In the centre is a sculpture by Doncaster artist Michael Johnson, showing the bomb destruction of a Spanish city. The memorial is marked by an information board, which records the historical purpose of the memorial, as living memories fade.

On the left, separate plaques record the names of five Nottingham volunteers who died in the conflict, and thirteen who returned home (although the exact figures are disputed – volunteering to fight was illegal and not all volunteers gave their real names).    One of those who returned, Walter Gregory, published his memories of being an International Brigades volunteer in the book The Shallow Grave: A Memoir of the Spanish Civil War, dedicated to Bernard Winfield, one of the dead.  Gregory, a shopworker from Bulwell, was wounded in three battles in Spain (The Independent quotes him as saying, of a bullet taken through the neck at the Battle of Ebro, “It wasn’t much, but by Jove it could have been serious”).  A warm tribute to him was published on the Five Leaves Bookshop blog in 2013.

First unveiled on 24 September 1993 by Jack Jones (a trade unionist and himself a veteran of the International Brigades) and Ambassador Alberto Aza, the memorial did not immediately appear contentious – and there are many other such memorials throughout the UK.  However, when the Conservative group was elected to overall control of Nottinghamshire in 2009, the information board for the monument was mysteriously removed.  I have been able to find no inside information on this, and if anyone from the 2009 or present Council wants to contact me to explain why the board was removed, I’d be delighted to hear it.  However, the reaction to this small act was telling.  For some, this was a denigration of an important act of anti-fascist resistance, often seen as a precursor to World War 2, in which many of the International Brigades volunteers also served.  Leader of the Labour group, Alan Rhodes, made a pledge to restore the information panel whenever Labour next controlled the authority.  When Labour was returned to Council control in 2013, on of its first acts was therefore to restore the information panel.

However, it went further than simple restoration.  In a special ceremony in the presence of veterans’ families, the memorial was fully rededicated as a significant part of local and international history .  Councillor Rhodes was quoted in local newspaper the Hucknall Dispatch as saying: ‘It is vital that this does not become a forgotten conflict.’  Also present was the Nottingham Clarion Choir, which sang Jarama Valley, a song of the Republic (later recorded by Woody Guthrie), commemorating an assault by fascist forces on British and US Brigades east of Madrid in 1937, which caused at least 350 deaths on the Republican side.  The original lyrics were written by Alex McDade, a Glasgow labourer who became political commissar of the British Battalion, XV International Brigade, and died of wounds sustained in battle in 1937 (Jump, 2006).  In the version sung at International Brigades reunions, the lyrics state the commitment to anti-fascism with defiance:

We swore in the valley of Jarama / That fascism never will reign.

Students have raised the question in class of why this history is so little discussed, and there are a number of possible explanations.  Are we perhaps uncomfortable with exploring Britain’s “non-alignment” in the Spanish Civil War, and the challenge laid down by our own citizens, who went to fight anyway?  Is it guilt over complicity?  Does it fit awkwardly with our national narrative of Britain as the plucky victors over fascism?  Or are some just happy to bury this, and accept Franco’s assertion that history is written by the victors?  The Republican government was, after all, defeated.  The International Brigades were stood down in October 1938, in a doomed attempt to persuade the Italian and German fascist governments to also withdraw their active military support for Franco.  But in suppressing these memories, however difficult, we remain haunted, as Jo Labanyi has argued in relation to Spain itself, by unfinished business.   Hers is ‘a serious message about the need for a kind of modernity … that engages with the past’ (2007:101) if it is to avoid re-running the conflicts of the past.

Although Conservatives (with Mansfield Independents) regained control of the council in 2017, the information board remains (for now?).  However, the response to its removal, and its reinstatement in 2013 with full ceremony, tells its own story – that in spite of, and perhaps because of, experiences passing out of living memory, history still matters; that bitter political conflicts resonate through time and across space; that battles over memory and identity are as current as they are historical, as international as they are national; and that the struggle for control over historical narratives can be seen even in something as apparently insignificant as an information board outside an East Midlands County Council hall.  Salud! 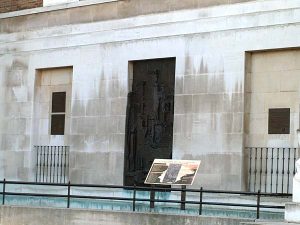 I am indebted to Ian Hewitt, whose grandfather fought for the International Brigades (representing the Co-operative Movement), for recording photographs of the memorial on his blog post, No Pasaran! (2007) here: https://www.indymedia.org.uk/en/regions/nottinghamshire/2007/12/387380.html

NOTE: This blogpost was edited to remove an incorrect reference to Walter Gregory attending the rededication ceremony.  Thanks to Five Leaves Bookshop for pointing it out.