In the previous post, I reflected on the contested nature of historical memory, specifically when it comes to the Spanish Civil War and the prosecution of the crimes of the Francoist regime. This was brought into sharp focus by the experience of taking part in a Civil War tour in Barcelona while I was there for a conference in September 2017. I have sympathy for any student who is asked to sit through a lecture of more than 50 minutes, so if anyone had told me that I’d find a four hour historical tour around Barcelona as fascinating as I did, I’d have been amazed. That it was so gripping is partly down to the leader, Catherine Howley, a Trinity College graduate with a Master’s in Museum Studies from Pompeu Fabra University, and the way she brought history alive – but also down to physical scars born by Barcelona’s fabric, often so faded now that you needed someone there to point out their significance. Never have I been so aware of the meaning of Franco’s obsession with the idea that “history is written by the victors” – and the painstaking work which has gone into righting some of the false narratives propagated by his regime.

I won’t try to cover the whole tour, but I’ll give just a couple of examples of the way the city has begun to bear witness to its own history. The first is the quiet Plaça of Santa Maria del Pi in the Gothic quarter of the city. Some hand-drawn Catalan words are clearly visible on the side of the church here, naming it the Plaça del Milíciá Desconegut – the Square of the Unknown Militia – in remembrance of all those who had signed up to fight with the Republican militias, many of whom never came home. In spite of Barcelona’s role as one of the key Republican strongholds in the Spanish Civil War, this was one of the very few remaining physical manifestations of this history, barring a few bullet holes in the Placa de la Catalunya, the scene of fierce resistance fighting in the early days of Franco’s coup. When Franco’s Nationalist army invaded the city in January 1939, all signs of Republicanism (and the anarchist/communist element which dominated Barcelona) were simply erased – just as the language they were written in was “erased” – and often replaced by names celebrating the fascist takeover. This particular inscription had survived the decades of Franco’s regime for one reason only: because no one knew it was there. The sign had been covered by boards – presumably by Republican hands – which saved it from destruction. These remained there until 2004 when the Church was being renovated (you can see the marks of the boards on the photo). Those few words, then, written in tar, tell a story not just about the second Spanish Republic and its fate, but about the keeping of historical memory as a form of resistance, and its eventual reemergence into the light. 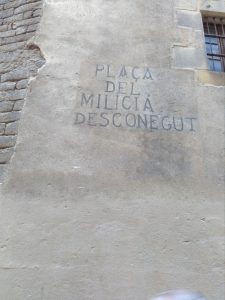 The second example is the square in front of the church of Saint Felip Neri. The façade of the church is pock-marked with extensive damage to the stone, which bears obvious witness to violence. In Franco’s narrative, this is where the Republicans – the ‘red lowlife’ – lined up the Catholic priests and nuns who sided with the Nationalists, and summarily executed them. Catherine’s tour doesn’t shy away from the realities of civil war at this point, and it’s important not to romanticize the Republican resistance. Priests and nuns were executed as enemies of the Republic – but not here. Most of the executions took place in the hills of Montjuic, where about 4000 later victims of Franco’s ‘white terror’ were also dumped into the mass grave of El Fossar de la Pedrera (the Grave of the Quarry). What happened at Saint Felip Neri on the morning of 30 January 1938 was a different kind of execution – its obliteration by bombing by Italian aircraft sent by Mussolini in support of Franco’s offensive on the city. The square was targeted because there was a nearby school, and when the air raid warnings began, the children took refuge in the basement of the church. The first bombardment caused the floor to collapse onto them, crushing most. The Italian bombers then returned two and a half hours later, as the survivors were being pulled from the wreckage, and finished them off, in a move designed to cause maximum casualties (Mussolini’s own instructions were for ‘repeated attacks spread out over time’ – see Lo Cascio et al, 2013: 84-85). 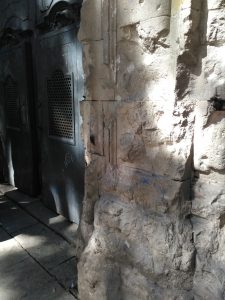 The staggering calculated brutality of these aerial attacks on civilians, more famously seen at Guernica, and often seen as a dry run for the Blitzkrieg of World War 2, can still take your breath away. The square is now however marked by two small plaques, again written in Catalan, and put in place by the Ajuntament (City Government) of Barcelona. One, on the wall reads: 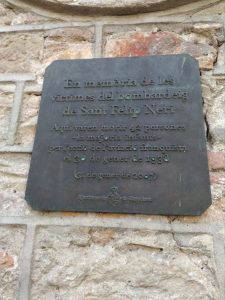 The second, set into the floor, goes further, saying: 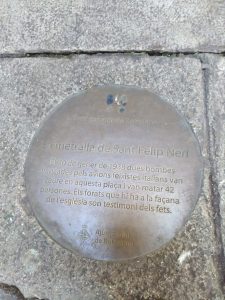 ‘On 30 Jan 1938, 2 bombs launched by the Italian fascist aircraft fell on this square and killed 42 people. The damage in the facade of the church is a testimony to the facts.’

This testimony is important. A couple of plaques, a few words in tar on a wall, may not seem much, passed by citizens and tourists in their thousands, often unread and even sat upon by young visitors taking a break from sight-seeing or studying. In the context of the long struggle over historical memory, however, embodied in the Law of Historical Memory of 2007, and written in a long-suppressed language, it is an important witness to the past, and to the resurgence of democratic Spain. One that gives the survivors and victims – not the “victors” – the last word.